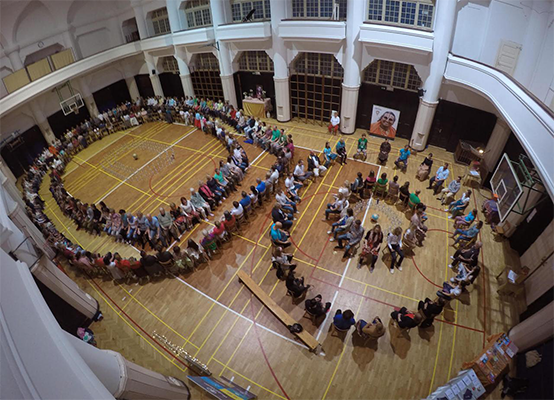 Slovenia, a tiny European country with only 2 million inhabitants, became big on September 22nd. The intention we'd been dreaming about for over four years since
OM Chanting first became available in Slovenia, came true at least! There is a spiritual equation that says: if 140 people meditate together with the same intention, this relatively small group has the ability to positively affect the consciousness of 2 million people - which in this case covers our whole country.

During the annual meeting of OM Chanting organizers in Slovenia in March, we made the decision that this special event will take place in September. The organization of the Maha OM Chanting lasted six months. It brought together people with different interests and views from all over the country. During this whole time, a special harmony and acceptance reigned among us. Our telegram channel was constantly active and the level of energy and enthusiasm never dropped. We knew that to make such a significant event - one that would bring so much goodness to this world and simultaneously raise the recognition of Bhakti Marga and Paramahamsa Sri Swami Vishwananda's mission - would happen only by working closely together. 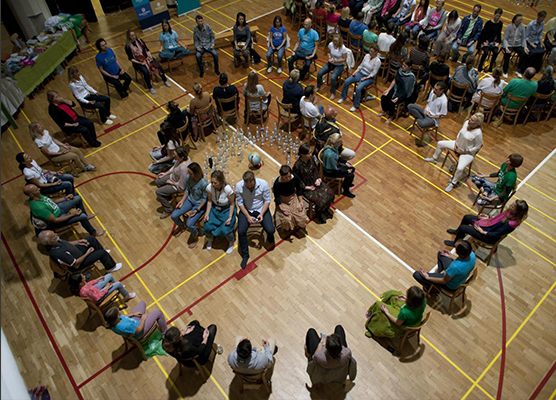 We put up endless posters, distributed thousands of flyers, sent out hundreds of emails and we were also very active with posting and sharing notifications about this event on Facebook. We felt that we were so very close to our dreams coming true! A few days before the event the number of registered participants reached the minimum number that we were aiming for - 140 people! However, what followed in the next three days went beyond our wildest imagination. The number of people registering for the event started rising with great speed, and we weren't sure that we'd be able to fit everyone in - despite the fact that we had reserved a quite large hall for this event.

The final number of participants at this event was 236! For many of them, this was the first time at an OM Chanting, and 30 people even came to show their support from the neighboring country of Croatia. Swami VishwaKanjalochananda was present at this event and gave a beautiful closing speech. Every participant of this special event received a bottle of informed water that had been placed in the middle of the Light pillar during the OM Chanting. While leaving the event, everyone was also gifted a necklace with an OM pendant and a quote from Paramahamsa Sri Swami Vishwananda. Our Veggie-team had prepared a sweet treat for all the participants. It was beautiful to witness the positive effect that this event had on all the people present. At the end everyone was open and in love, their eyes shining. Many have expressed the desire to have these events again in the future and wished us to keep going in this direction. It is an enormous Grace to be part of Paramahamsa Sri Swami Vishwananda's mission and to contribute to more peace in the world.