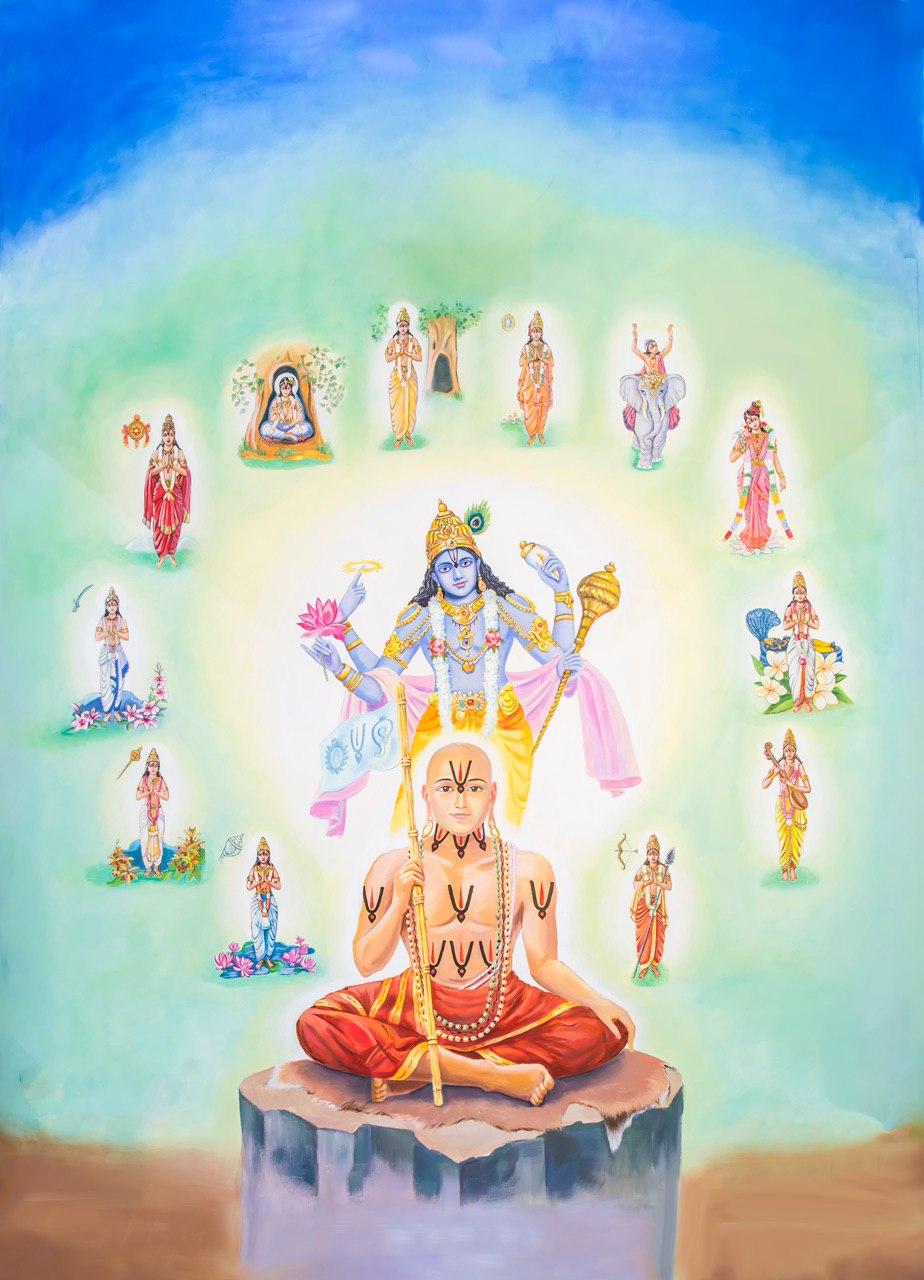 “All of you are dearer to me than my own life. Therefore, I long to deliver you from the suffering all of us must undergo in this transient world! Please recite this mantra which I obtained for you and the Lord’s mercy will be upon you!”

Standing atop the tallest building in the city with the citizens staring up at him, Ramanujacharya yells out three times, ‘om namo narayanaya’. The people respond, echoing the mantra back each time. They came expecting jewels and left with the grace of peace and love of God within their hearts.

Today is Sri Ramanujacharya Jayanti. In his long life of 120 years, he left an ongoing impact on the world that we still experience today. There are endless acts that are praiseworthy and outstanding. However, it’s not these innumerable accomplishments that should be noted. In truth, it was his unrivalled Love and service for God that was infused into every one of his actions that remains.

Ramanujacharya did everything for the Love of God.

Ramanujacharya as a Young Man

He was born into a well-to-do brahmin family. At an early age, he risked his life speaking his truth about the importance and depths of our relationship with God. Ramanujacarya was touched by the devotional works of the twelve great Alvars –  bhakti poets and saints – who spoke of their love for Sriman Narayana.

This love pushed him further to propound the Vaishnava theories, debating those of Adi Shankacharya’s which were firmly rooted throughout India. He was the first scholar to offer a strong argument in contrast to Adi Shankaracarya’s teachings from centuries prior. He proclaimed God’s personhood and immanence just as much as he spoke of God’s transcendence. Because of his profound insight and intellect, he was called beside great gurus and masters within the Vaishnava sangha as a young man. They inspired him, and revealed his life’s work to come.

One such inspiration came in the form of Kanchipurna, a low-caste servant of Lord Varadaraja. It is said that Lord Varadaraja came Himself to be with Kanchipurna. It was Kanchipurna’s humility and innate wisdom of Love that guided Ramanujacarya early on.

Ramanujacarya saw that service to God should not be exclusive, but rather, that all should have the opportunity to serve the Lord. Caste, he saw clearly, was no reason to discriminate. If castes mattered, why then would Lord Varadaraja come Himself to be with such a devotee as Kanchipurna?

This would impact him for the rest of his life as he strove to create sangha throughout South India that would facilitate the service to the Lord regardless of caste.

Yamunacharya, the great Vaishnava acharya of Srirangam Temple in Tamil Nadu, had kept his eye upon Ramanujacarya for some time. Eventually, Yamunacharya saw that, he would need to choose a successor to care for the temple and sangha upon his death. Ramanujacarya was the clear choice in the great guru’s eyes.

Ramanujacarya was called to his deathbed, where Yamunachaya revealed three of his wishes for Ramanujacarya to accomplish in his life. The three wishes were:

1.       To free people from illusion and spread the glories of Lord Narayan throughout India

2.       To establish that there is no truth beyond Lord Narayana and that a Vishishtadvaita commentary be written on the Vedanta-sutra and expound Vaishnavism

3.       To continue to commemorate the name of Parasara, the author of the Vishnu Purana

Disturbed by the death of the great master and leader of the Sri Vaishnava community in Tamil Nadu, Ramanujacarya retreated back to Kanchipuram only be called back a year later to take over Yamunacharya’s old position as leader of the sangha and temple.

Hardly thirty years old by that time, Ramanuja had been already esteemed by great masters and gurus alike to lead the Sri Vaishnava tradition, and to firmly establish a sampradaya -- a lineage with tradition and teachings.

Eventually he did write convincing works that converted thousands, and as an acharya and guru, he guided many on their spiritual path. Sri Ramanujacarya’s own guru, Mahapurna (a disciple of Yamunacharya), instructed him to take diksha into a great and secret mantra, a maha-mantra from Sage Gosthipurna. Ramanujacarya travelled far by foot to reach the sage. However, he was turned away by Sage Gostipurna.

Nonetheless, steeled by his persistence to follow his guru’s instruction, Ramanujacharya continued to pursue initiation from Gosthipurna. Finally, after eighteen long journeys, Gosthipurna initiated Ramanujacharya into the mantra.

Upon hearing this great mantra, Ramanujacarya went into deep ecstasy. A great joy and bliss arose within him, having experienced such a merciful and gracious mantra. Gostipurna reminded Ramanujacarya that with such a mantra comes great responsibility. It must remain a secret, only to be received by those with utmost purity, detachment to the world and devotion.

Within Sri Ramanujacarya grew a deep desire to share the mantra with everyone. He felt that it was too great to be kept secret, that this mantra holds the grace to release all from suffering and attain the shelter of the Feet of Narayana. Ramanujacarya could not hold the mantra for himself, and so climbed a tower in a busy part of the city and called out to the crowd to gather. He told them he would give away a precious jewel, attracting many to think “this crazy monk must be giving away all his possessions!” With the people gathered around, Ramanujacarya called to them saying,

“All of you are dearer to me than my own life. Therefore, I long to deliver you from the suffering all of us must undergo in this transient world! Please recite this mantra which I obtained for you and the Lord’s mercy will be upon you!”

At this, Ramanujacharya yells out three times, 'om namo narayanaya!' Everyone echoes it each time. All were graced through Ramanujacarya to go into ecstasy much like the great saint had. They came expecting jewels, however left forgetting their material wishes, instead with the grace of peace and love of God within their hearts.

Gosthipurna heard this news and became furious with Ramanujacarya, cursing him to eternal damnation for sharing such a precious jewel. Ramanujacarya, with humility and love went to the sage Gosthipurna and said to him, ‘It was only because I am prepared to suffer in hell for eternity, that I dared to go against your order. You told me the mantra would liberate anyone who chanted it. Now many have the opportunity to find shelter and the Lord’s feet’. Shocked and amazed by his sincerity and love, Gosthipurna saw the greatness of Sri Ramanujacarya, and fell at his feet, asking that his own son become his disciple.

Success in His Mission and Lasting Impact

In time, Ramanuja did succeed in fulfilling the wishes of Yamunacharya. Among the many accounts of miraculous healing, he substantiated the tradition of Sri Vaishnavism and established the roots of the practices. He decided the rituals and chants that were to be sadhana for the devotees. He gave discourses continuously about the Love of God, imminence and transcendence of the Lord, and taught that that highest goal of humanity is to realise God. He made sure to spread the mantra om namo narayanaya and the passion of the Alvars throughout India

Bhakti marga, the path of devotion, was his complete focus. Everything he did in his life was to serve the Lord and to serve the people in their relationship with God. He had brought many locals together to form a service of sharing the grace and blessings of the Lord to all the people in the community. There was an urge of care that the great acharya had brought with him wherever he went. This deep compassion for the well being of all, both in body and in spirit, was evident in Sri Ramanujacarya.

His life was a true dedication of Love. He is venerated as a true example of the Lord’s grace and Love. Thanks to him, we all have a maha-mantra that calls upon the mercy of God to release us from suffering, and lift us into the shelter of the Lord.

Due to our current climate right now all around the world we have people connecting via online platforms to do daily sadhana practice together. This is the perfect opportunity to delve deep into your sadhana with the love and support of our worldwide community.

Click here to get our newsletter containing our online offerings and updates on the blog.